When Emily feels well (and decides to wear her wig) – you’d have no idea she is even sick if she wasn’t using a crutch. We are so thankful for how God is carrying all of us through this.

It has been exactly one month since our last update. Here is the latest – if you are following Emily’s story.

What Has Happened Since Our Last Update:

Two or three times a week Emily has to get a blood test. She can do that locally and doesn’t have to go downtown. They test her in case her numbers are too low, they can send her to the hospital to get a transfusion or fluids. Although even on her non-chemo weeks, she has rehab down at MD Anderson 2 or 3 times a week.

This was taken just before we left the hospital after her last methotrexate treatment in June. She has to get a shot in her stomach to help her white blood cell counts go up. But we were packed and ready to go.

It is always great to see Emily walking through the hospital without the fulid cart attached. That means she is on her way home!

Last year we began a July 4 tradition of eating garbage plates to remind us of Rochester. (For those not from Rochester, Google it – it really is a thing). The problem was, Emily was going to have chemo on July 2-3 – so she knew she wouldn’t feel like eating on the 4th. So we moved our July 4th celebration up a few days and enjoyed garbage plates at the end of June.

While we wait to get discharged from her mouth ulcers (one of only two times she had hospital stays that weren’t chemo or surgery related). That is pretty good, we hear. 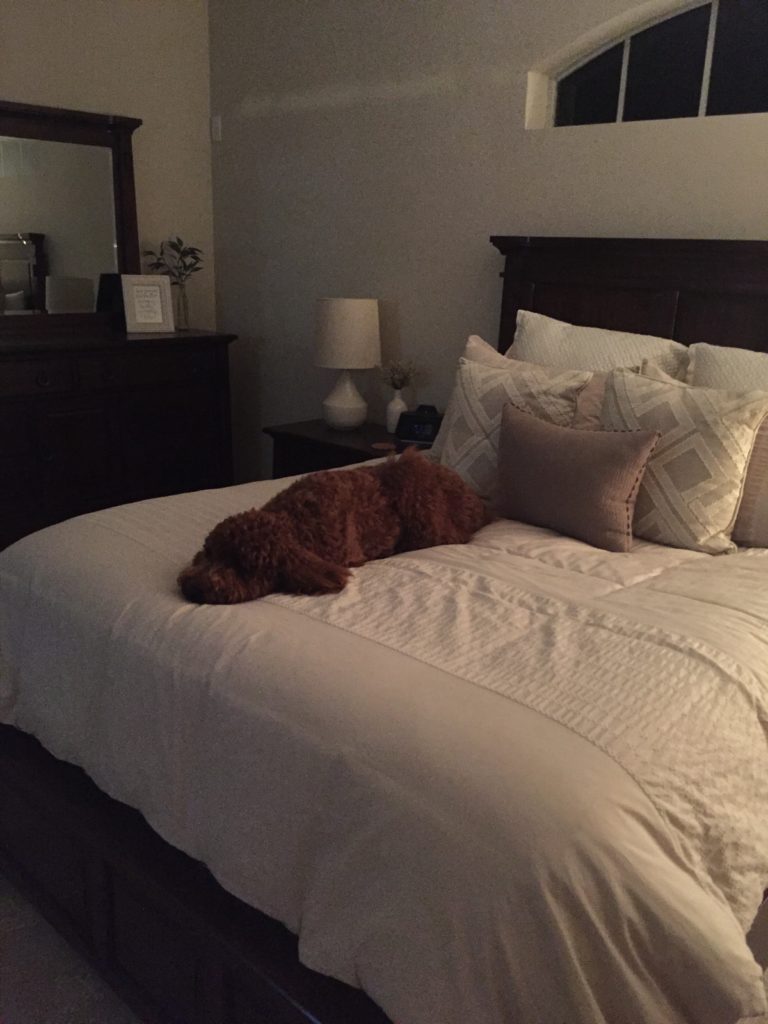 Daisy gets a bit sad, it seems, on hospital weeks because we are all away. I’m still shocked Sue lets the dog on the bed.

She may be everyone’s favorite in the fam, but when I came home and found my sandals like this – we had to have a chat. She gets into mischief when she’s alone for a long time.

She gets very happy when we get home from a hospital stay.

She’s a cuddler… and everyone takes advantage of that.

She and Sue napping after a hospital stay.

Emily decided one night that she was going to make dinner. So she did. She didn’t want help from anyone else. I’m sorry I was traveling and missed it!

A neighbor a few doors down is away for the summer and gave us permission to use their pool. It is great for Emily’s rehab! But Daisy wants nothing to do with it.

When I travel, I have been blessed with some new, great friendships. Recently I spent a couple of days back at The Village Church and enjoyed again spending time with their elders and leaders. They have been faithfully praying for Emily (along with other churches I’m able to serve). I’m so thankful for them.

Recently, some old friends came into town. Dena & Tom Butler were in town and we were able to go to breakfast. Dena’s husband passed away from ALS several years ago. And Tom’s wife passed away from cancer a few months later. They recently were married. The time we spent with them was a great blessing for Sue and me.