Our last update was over a month ago (4/11/18). You can find that here: https://wp.me/p6gPya-1Uh. That was written on April 11 while Emily was enjoying a couple of weeks off before her next methotrexate chemo treatment. That was supposed to start on April 24 (we started one day late), but since then, nothing has gone according to plan.

I will give a brief update and for those that just want pictures, I have plenty of those at the bottom.

First, the good news… It has been great to have a lot of family visit us over the last month. Ali and her boyfriend (now fiance) visited for a few days. My sister, Mary, came back for about a week to help during a chemo round. My mom came for a week, and now Sue’s parents are with us for about a month. Having family to support and help – especially when I am traveling – is very encouraging and uplifting. We are very thankful (pictures later).

The summary of the bad news is this: today (5/13) Emily should be done with round #10 of chemo, but instead, she hasn’t even started round #9. Here is why:

While Ali & Justin were visiting us, he asked me to go to breakfast. While there, he asked my permission to ask Ali to marry him. After a couple hours of grilling him, I joyfully said, “yes.” We are thankful for Justin! Two years ago when Justin was an intern at Northridge, I remember Sue telling our girls, “One of you needs to marry that boy!” I’m still not sure who likes Justin more – Ali or Sue.

Having Ali and Justin here during a chemo break was a great blessing for Emily. Ali had talked to us about a wedding, but never in front of Justin. Once they talked together about getting married, Emily kicked us off the patio so she could ask Justin some questions. She had a lot of good questions for him, but the final one was, “Will you tell me when you are going to ask her?” He promised to let her know ahead of time. A couple weeks later, one evening, Emily got a text from Justin that simply said, “Game Time!” and we knew what was coming.

The engagement… followed by… 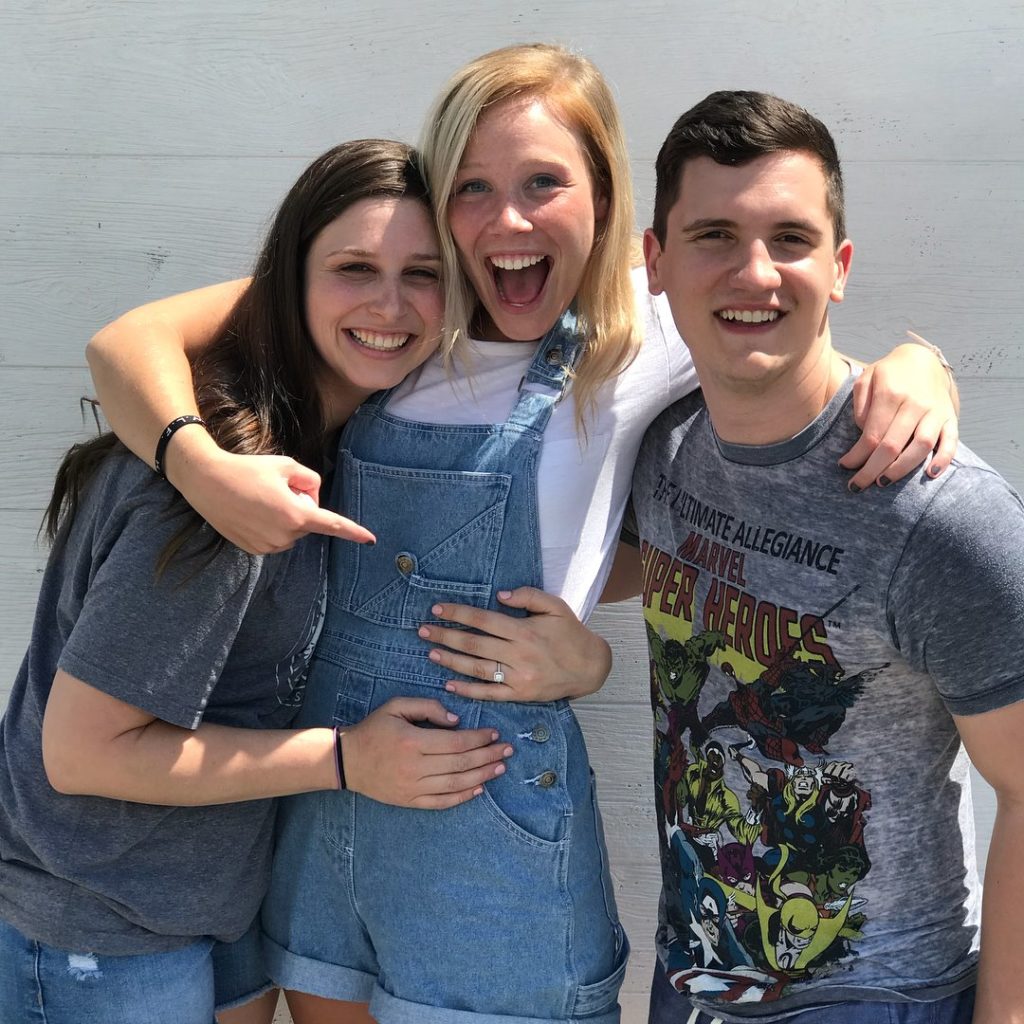 … a stop at Liberty to see her sister, Morgan. 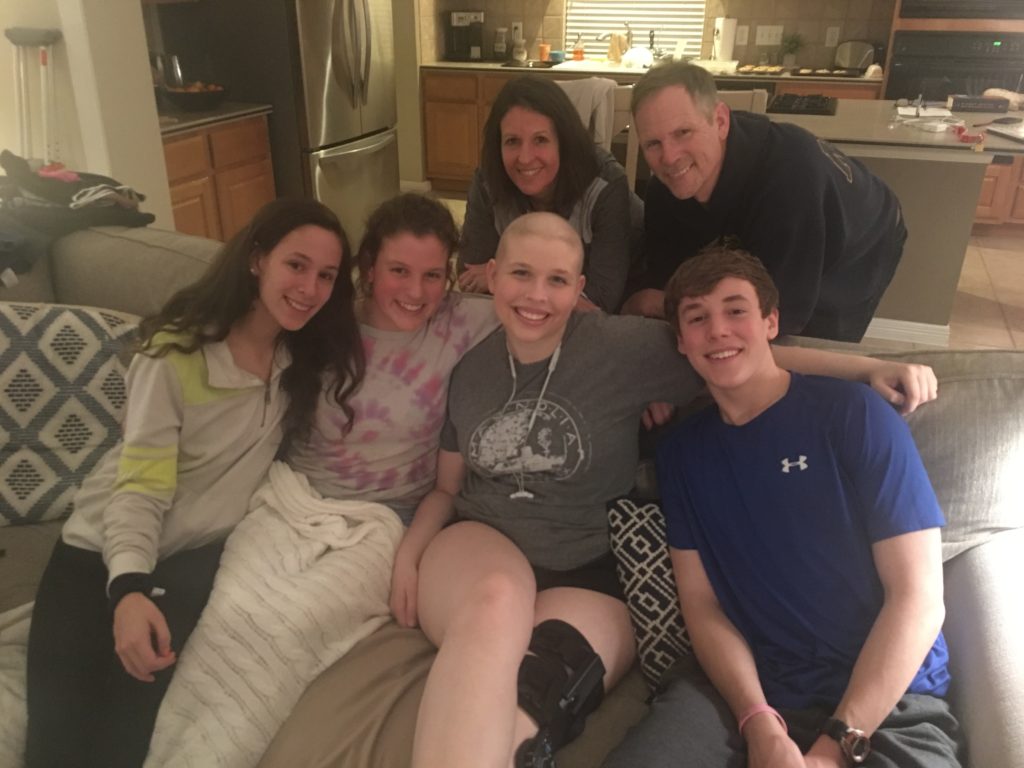 My brother’s family drove through Houston on the way to a cruise and were able to spend about three days with us during Emily’s break. It was great to see them.

We ended their visit with their family praying for Emily. Having people pray for Emily means so much to us, and when they can pray for her while with us, it is very special.

President George Bush was in the hospital recently. His hospital is right behind MD Anderson – so there were a lot of news trucks around for a few days. 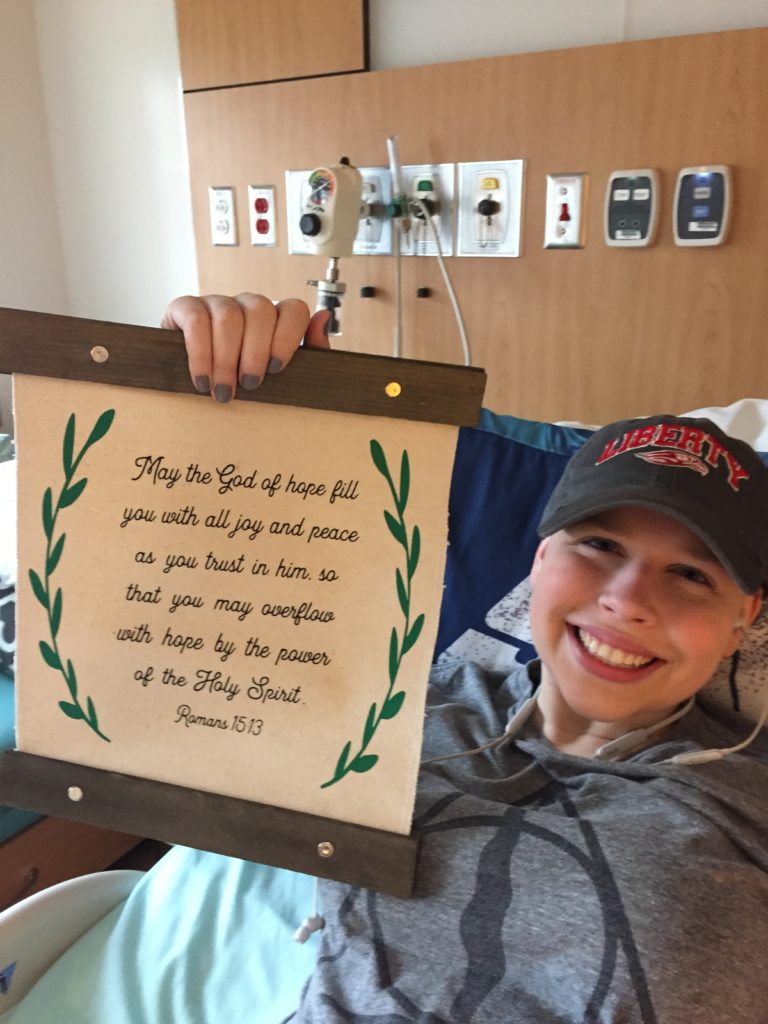 Each chemo round, I give Emily a statement or verse to focus on through the treatment. This is the verse that has been foundational through our entire process. Romans 15:13 – May the God of hope fill you will all joy and peace as you trust in him so that you may overflow with hope by the power of the Holy Spirit.

This isn’t Daisy. It is Daisy’s friend, Jonesy. The point of this picture is so you can see Emily’s hair was starting to grow back. She had a lot of time from her last chemo, then a break, then surgery, then a break. And in those weeks, her hair started to grow back, but now it is falling out again as she’s had two treatments since surgery.

The hospital had a “prom” for the cancer patients. She felt well enough that day (it was day 3 or 4 of a methotrexate treatment), so she decided to go. Here is the “before” picture. 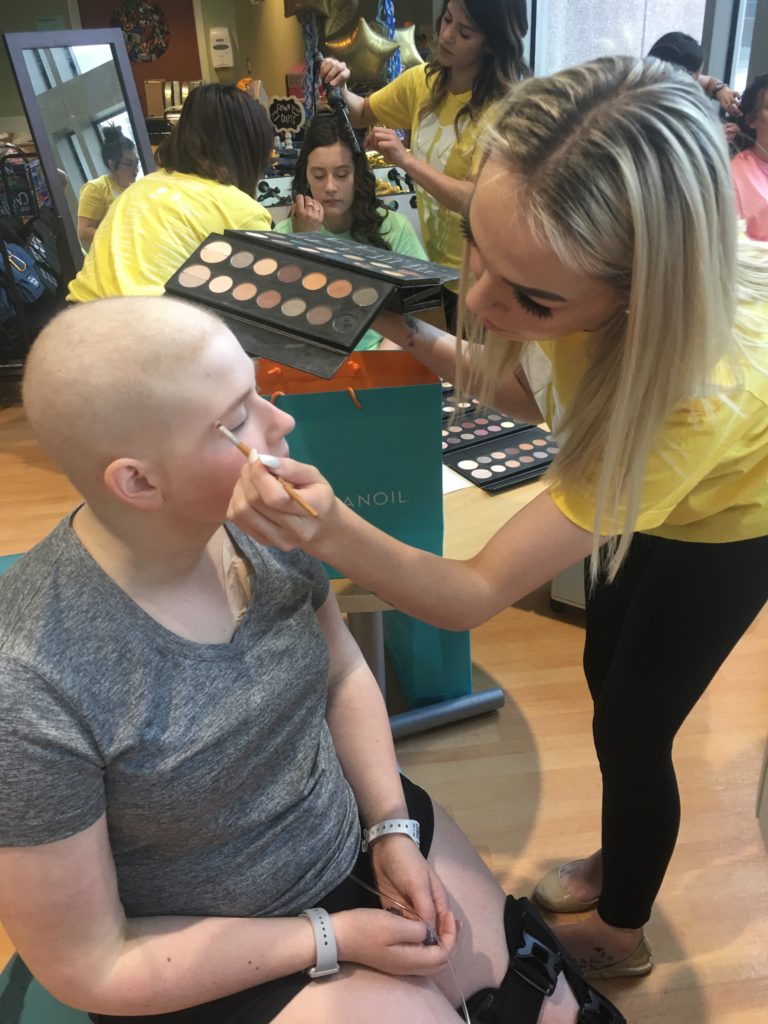 Getting her makeup done.

Getting her wig hair curled.

The final choice of a dress. Ready for the prom.

Emily didn’t stay long. She started wearing out quickly. The prom was on the observation floor of MD Anderson. The problem was, there is only one elevator that goes all the way to the top and it broke while she was up there. So this is a photo of Emily going down 4 flights of stairs to get back to her room. The director of the hospital was there and plenty of nurses to help get her down.

This is Emily’s oncologist, Dr. Daw. We are thankful for her.

When Emily made her 3 wishes to the Dear Jack Foundation, she wasn’t sure if they would grant them or not. So the day she got her first wish, she was pretty excited to open her new Apple watch!

Aunt Mary came for a visit to help Sue and hang with Emily. It was great to have her again.

When Emily was required to go in all day to get fluids, there was a Saturday she was headed in. The problem is, the outpatient part of the pediatric cancer center isn’t open on weekends. That meant Emily would have to be in the less unfamiliar adult cancer center for her treatment. Thankfully, this nurse, Anne, volunteered to come in on Saturday and they opened an entire wing (normally closed on weekends) so Emily could get fluids in her normal surroundings.

If you made it this far, thanks for your concern for Emily and especially your prayers. I will try to send an update next week after we know what is next.